It's fitting that I would post a blog on the last day of my time here in my little village.  Tomorrow, I’m booked for a bus ride back to Kathmandu and some days after that, a flight home to .

Once again, I blew the WELNepal budget.  But I do have great reasons for doing so! It is money (that I don’t have) well spent. For example, the women from “Mike and Max’s Class,”  followed me from village to village, asking for and then demanding a literacy class. I decided to give them the class, because, even though we reached our literacy class limit, I knew that the women from Mike and Max’s Class would be a great one.  Besides, I was afraid that they would wait outside my lodge door if I didn’t give in.

This year, we are trying to extend our target area to more remote places.  Raj, our coordinator, and I visited an area called Madi, where we were met by a group of very committed women who have asked for both literacy classes and organic farming training.

We have also been asked to help women acquire sewing machines and teach them how to use them.  And we would love to dig for some precious water in an area where we  know the women could use wells for both private and commercial use year round. 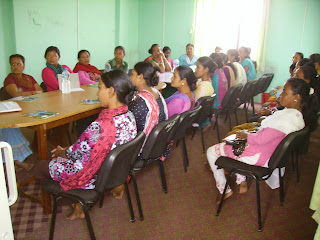 But our first priority is to open a vegetable shop, owned and operated by those women whose groups grow organic vegetables.  The women’s groups are super at growing vegetables but have a little difficulty selling them.  We feel that selling their produce through a shop would give the women and our project the best chance for success.  We have begun this process with a meeting with the women whose groups are most interested in being part of the shop.  That would be ALL of the women involved in our project. I’ve included a photo of the women at the meeting where discussions became somewhat intense. But it is truly wonderful for me to see a group of women hashing out details on a project that will be operated by them. Two or three years ago, the only skills the women had mastered were cooking and making more hungry Nepali babies.

In summary, with all the projects we wish to start next year and all of those groups of women whose education we could not start this year due to a lack of funding, we only need to raise about a billion dollars this coming year to really do a proper job in 2014.

But this year we did a great job with all the financial support, big and small, from our supporters back in .

As to why I was a little remiss in my blogging this year, my only excuse is that my blog guru Ashley and her friends Anton and Kim were here visiting.  Kim waited in vain on the tarmac in Kathmandu for a flight around that never took off (mist often grounds flights in ), Anton had a million questions about WELNepal’s work that I was more than happy to answer, and Ashley spent most of her time cuddling little street puppies.  Diana, one of Tribe MayaFire’s belly dancers, spent time visiting those women’s groups who are being supported by all of our best ever belly dancers and their generous supporters. It seemed to me that Diana was a little more emotional than blasé about ALL the women that have benefited from her group’s help.

WELNepal’s long-time friend and our benefit’s master of ceremonies, Barry Flatman, spent considerable time here charming and videotaping everyone in his path. I've included a photo of Barry with him actually in front of a camera videotaping an interview with one of our alpha women. By the way, WELNepal’s coordinator, Harimaya Bhandari, is sitting beside him.

Now WELNepal’s new friend Anh is here helping young and old with their English and also learning how warm and friendly and kind Nepali people are.

It has been a pleasure for me to host all my visitors.  My only hope is that I can do more of that.  Which leads to ask once more: when are you coming?

Posted by WELNepal at 10:52 No comments:

For those who don’t know me (which is probably 99.9 per cent of you), I’m Ashley – the true master of this blog and, therefore, runner of this online joint. I edit and post David’s blogs and spruce them up with David’s pictures. Any ugliness or mistakes on the blog can be blamed on me.

I was recently in for two weeks, and got to see how much WELNepal’s work is helping women in the Chitwan area better their lives. David has often said that when he first met the local women, they were silent and shy. Learning to read, write, organize, hone new agricultural skills and develop a support system has changed them. The classes I met were filled with friendly and enthusiastic women who are dreaming bigger and wanting more.

But while the sight of the students and their families smiling and laughing and interacting was indeed an inspiring one, there’s much more that must change. One of the first things I noticed when I arrived in was the incredible pollution and chaos. The roads — which are in poor condition — were overrun with cars, pedestrians, motorbikes and animals.

Stray dogs are a huge problem in . They’re plentiful in number and while most didn’t appear aggressive, many were injured and in poor health. Rabies is a problem. Mange is a problem.

While I did not see any locals mistreating the animals (actually, I lie, some old guy threw rocks at a dog in front of a restaurant), some people do abuse them. There have even been reports of locals throwing the dogs into the river to be killed by crocodiles. And while it’s important to remember that many Nepalese do feed and care for the dogs (and even keep some as pets), it’s equally important to note that, in Nepal, animal sacrifice is still common and remains a contentious and upsetting issue for many who witness it.

Because street dogs are considered pests, they’re routinely poisoned. And while some might shrug and say that that may be the only avenue of population control available to a developing country, that’s simply not true. Poisoning the dogs is not only inhumane, it’s ineffective. The dog population is still out of control.

Stray cats are less of an issue, but some still roam the streets. Another issue is malnourished equine animals, such as horses, donkeys and mules. The horses that ferry tourists around Chitwan are often underweight and suffer from skin conditions. Many had untreated open sores and cracked hooves.

One family we visited, who has a daughter involved with WELNepal, introduced us to their new puppy Fi-Fi (or Phi-Phi, if you prefer more authentic spelling). It was during our dinnertime cuddles with Phi-Phi that I asked if there were any shelters or organizations looking after the strays. As expected, many reminded me that, in an impoverished country, feeding and sheltering the people is paramount. The dogs come later. Much later.

But who says human and animal rights activism need be mutually exclusive?

While WELNepal and other organizations seek to enhance people’s quality of life by tackling poor education and inequality, other groups do dedicate time and resources to helping four-legged Nepalese creatures improve their lot. Case in point — HART (Himalayan Animal Rescue Trust). A Pokhara-based charity, HART carries out mass humane sterilization programs, vaccinates street animals for rabies, rescues and treats sick and injured animals, and educates the public on animal sentience (to discourage cruelty and abuse) and responsible pet ownership.

It’s also important to remember that animal rights activism and pet ownership aren’t hallmarks of spoiled societies. In , the suffering of the animals often mirrors the suffering of the people. All needless suffering is unacceptable and needs to be addressed. When people lose their livestock in the monsoon, they lose their livelihood. When people freely abuse smaller living things, it becomes easier for them to lose respect for each other (especially those smaller – often women and children). When dogs are abused, they may become aggressive and pose a danger to locals (especially children). When dogs are sick, they can transmit disease to people.

A society that respects and nourishes its animals is a thriving, growing society. A society that can afford to provide all creatures — both great and small — with a comfortable and dignified life is a prosperous and healthy one. The more we educate the people, the more the people are able to adequately care for and control the dog population.

So yes, the people do come first in the sense that elevating them will elevate the quality of life of their wildlife. But it doesn’t mean you can’t help the animals and people simultaneously. You can – if there’s room in your heart, life (and, yes, wallet) for both, of course.

So, if you want to throw the dogs some monetary bones, check out HART’s website. If you’re veterinarianly inclined, you can also donate supplies or even go to Pokhara (a lovely city) and get your hands a little dirty helping the ground staff carry out their duties.

I’ll leave you with  a shot of little Phi-Phi. 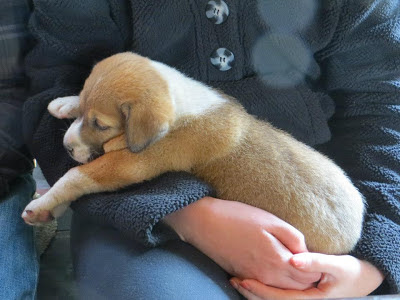 Ashley
Posted by WELNepal at 13:50 No comments: