Before I begin, let me say that I’m not really a seasoned traveler. I, like most other WELNepalis, am from Toronto. I’ve traveled to multiple destinations in Canada, US and Europe, and while in Europe for the first time back in 2007, I experienced minor culture shock regarding the different languages, casual approaches to line ups, and stringent dining etiquette in certain areas (no pasta at 5 pm in Paris no matter how badly you want carbs!).

I felt out of sorts and out of place and thought my Amsterdam hostel looked like a women’s prison.

To be fair, it kind of did. Picture a dozen bunk beds, one sink, and a bathroom with semi-open showers. But I was in Amsterdam. I was in the lovely, clean and prosperous Netherlands and I was complaining. Not complaining about everything, mind you, but vocalizing my discontent with my accommodations pretty regularly. And it wasn’t even that my hostel was all that bad. It was just different. As I learned on that trip and others that followed, different can be hard.

So imagine my shock when I went to Nepal to visit WELNepal’s project area in February of this year.

That was more than just different.

When I arrived in Kathmandu, I was struck by how tiny and chaotic the brown wooden airport was. A sign warned me of the forthcoming constant car horns, as horns are “how Nepali’s express themselves!”

*I should also say, before I go on, that my entire two-week trip was expertly organized by WELNepal’s good friend (and excellent travel agent), Nawal Khattri. You can visit Nawal’s website here: http://discovernepal.com/index.html.

Once I arrived at Hotel Blue Horizon in the famed district of Thamel, I met up with two friends and fellow WELNepalis Kim and Diana.

They had been touring Kathmandu for several days with one of our wonderful guides, Mingmar, and assured me that I would get used to the chaos and wildly different surroundings.

But while I will admit it’s hard to feel at ease when you don’t know how to “work” the culture and you stand out so much by virtue of your appearance and mannerisms, we never felt unsafe. Aside from bargaining difficulties while shopping (prepare to haggle!), the people were incredibly welcoming and eager to chat.

After my first night in Kathmandu, we boarded a Greenline bus to Pokhara. Pokhara is where tourists begin their Annapurna treks, and as we found out, Annapurna treks are really hard. 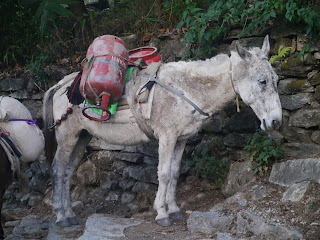 After our trek ended, we finally made our way to Sauraha to enjoy the Chitwan region and meet several of the women’s groups involved in WELNepal.

Upon arrival, we were greeted by David (affectionately known in the village as David Daai — which essentially means Brother David). David Daai is a mini-celebrity in the little village, and people will often come out of their shops or restaurants to ask him if he’s eaten (a common question in Nepal). Through David, we met many wonderful families, including the Rimal’s and a hospitable family who taught Anton, my boyfriend, how to play a traditional Nepali board game on a rainy day (below).

We went to the Rimal’s tiny and delicious restaurant (run out of their home) several times over the week we spent in the village. There, while eating the best dal bhat we had on the trip, we chatted with the couple’s two daughters, Susmita and Asmita. Susmita is currently working as a volunteer nurse (at the time, she was preparing for her exams — exams that apparently went quite well!).

But the most exciting part of the trip came when we got to spend a day with some of WELNepal's women's groups.

Early one morning, we set out on motorbikes driven by some of WELNepal’s generous and hardworking coordinators, including Raj and Jugge.

We visited their office, and then set off in drizzling rain to see the classes first hand. Our first stop was the women of Ashley and Anneli’s class (named after me and WELNepal’s webmaster, Anneli West). 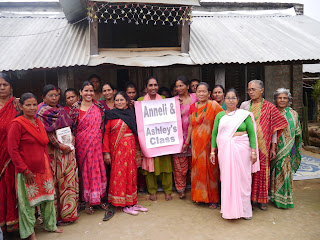 The women welcomed us into an open, outdoor space by giving us beautiful flowers to hold. After the coordinators introduced us and explained our visit, we got to chat with the women and their curious, excited children. We also got to take pictures, and every child was excited to see each and every shot.

After we finished visiting with that class, we went to visit the women involved in L.M. Clark’s class (L.M. Clark is a Canadian customs brokerage company that sponsors a Basic Literacy Class). This class had a huge open area in the middle of what appeared to be a rectangular rural complex. The women and their children sat outside on the ground, and gave each of us a bouquet to welcome us. 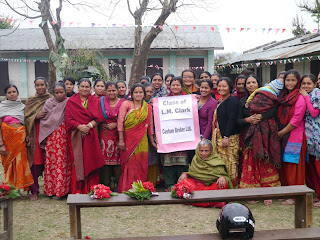 The women of L.M. Clark’s class weren’t at all shy — and neither were their children. They happily posed for photos, asked questions through a translator, and chatted with us about their class and asked us questions about our lives in Canada. It was during this meeting that we first saw Sharmila. Sharmila, as you might expect, carries herself confidently. She speaks loudly and clearly and is visibly proud of the women she represents.

One interesting question that the women asked is whether or not any Canadian donors would be willing to start an educational organization for Tharu children.

For those who don’t know, the Tharu people are an indigenous ethnic group native to the Terai region of Nepal (the area that borders India). But although they are recognized as a distinct ethnic group, many children are disadvantaged from a young age because they do not speak Nepali and, as a result, fall behind quickly during their early schooling years.  During our meeting, one of the women asked if we could fund a school for Tharu children.

It was hard to say that there wasn’t much we could do immediately, but that we would keep her important request in mind.

After our visit ended, we walked through the village and admired the colourful houses and sprawling cattle.

Our last stop of the day was George and Eva’s vegetable growing group.

The women involved in this group grow mushrooms and they showed us around their expansive property and even showed us where they make and store their homemade fertilizer. They, too, happily posed for pictures and showed us their colourful homes.

A day after we visited WELNepal’s women’s groups, we went to a small Tharu village and spoke with some of the local girls. Diana showed them pictures of her friends, home and family back in Canada and David Daai told one of the girls that I let my dog (who I showed her a picture of) sleep in my bed with me.

She seemed shocked (that isn’t typically done in Nepal), but was very polite about it. A little Tharu boy also let us pet his beloved baby goat (below). 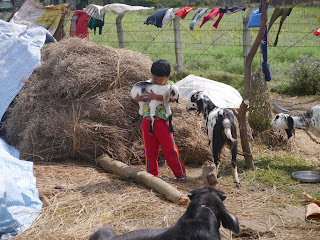 After we walked through the Tharu village, we went to visit the women of Sapana. For those who don’t know, Sapana is a Canadian company that produces and sells products that are handmade by Nepalese employees using New Zealand wool (a very international company indeed!). You can check out their website here: http://www.sapana.ca/sa/index.php. They produce clothing and accessories, and the women there showed us the stuffed children’s toys they were creating in their airy, open office that was complete with a tiny kitchen and a bedroom for an employee’s new baby.

As our time in Sauraha drew to a close, we tried to say goodbye to as many of the generous Nepali friends we met as we could. We visted the Rimal’s one last time for buffalo mo-mos, and they were just as good as the mo-mos we all devoured several nights earlier at a local musical festival.

We took email addresses and Facebook friend requests and prepared to leave David Daai’s tiny village and the women of WELNepal, promising to return as soon as we could. The atmosphere in the village is unmatched by anything else. It’s not like the bigger cities where you can get lost among tourist spots and have to work to avoid careening vehicles and stray animals (though there are lots of heartbreaking strays and cars in the village and you must be careful to avoid the cars). The village has a quietness and friendliness about it. The people are open and talkative and helpful. They welcome you into their shops and homes and restaurants with genuine smiles and enthusiasm.

There’s also much to do in the village. Besides visiting the women, we rode an elephant, saw wild rhinos, went on a crocodile canoe ride and hiked in the jungle.

A friendly stranger with a flashlight helped us find our way back to our hotel during a blackout and the employees at that same hotel came and got us from our rooms one night when they worried we were missing out on a Tharu dance in a meeting room.

We drank more masala tea than we can remember and bought more than our share of special Nepali tchotkes. We also saw many mahoods riding their elephants through town. 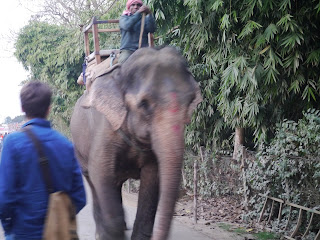 You won’t see that in Canada. Ever.

So while it would be a lie to say that a trip to Nepal isn’t quite different if you don’t know what to expect, it’s certainly more than worth the long journey to get there.

So, in the words of David Daai, when are you coming?